The Labrang family, dressed to see the Dalai Lama

Angela Labrang has been a familiar face around the Kiva since she joined us in 2010, but she’s had a lot more going on behind the scenes.  Her life outside the deli includes a family and a business, both small but growing.

Today, while cleaning out her locker in the Kiva’s employee area she was heard to remark, “My locker is filled with tea–like the rest of my life.”

Yes, Angela’s life is filled with tea, and now she’s moving on to spend even more time with camellia sinensis–the plant from which green, white, and black teas are derived–and other herbs and spices that go into the subtle and enticing blends that Labrang Tea Traders, Angela’s company, provides for the Kiva and other stores.

Angela and her husband-partner Shedhe have been slowly growing the business since  they acquired it several years ago from a couple whose growing family demands no longer left them time for a sideline.

Originally known as LMF Tea Traders, the company is changing its name to Labrang Tea Traders to reflect the area where Shedhe grew up and which he and Angela have adopted as a last name.  One of the motivations for acquiring the tea company originally was to help keep a connection between them and Shedhe’s family in Tibet.

Angela and Shedhe met in Daramsala, India, in 2006, where Shedhe was living as a Tibetan refugee and Angela was studying Tibetan language and culture.  They married in 2008 and returned to the US in 2009.  Their daughter, Sonam, was born in 2012. 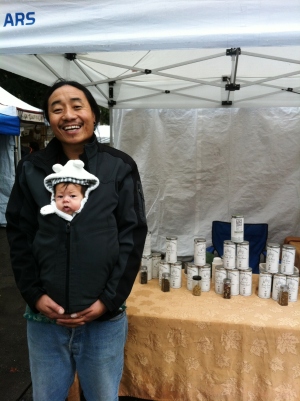 Her coworkers know Angela is passionate about tea, and also passionate about social responsibility.  Her carefully-sourced ingredients are all organic, and fair trade as often as possible; one of her goals is to visit the farms where the tea is grown to see the agriculture for herself and to verify the conditions the workers experience.  She is also working with local farmers as well for organic herbs and spices to use in the blends.

The Labrangs work as a family.  Angela does the blending herself, taking an inspiration and tinkering with the nuances until it tastes just right.  Shedhe brings a knowledge of Chinese and Tibetan teas, as well as Chinese, Tibetan, and Hindi languages to the partnership–an aid in communicating with people in the countries from which the tea is sourced.  Sonam provides inspiration and cute overload.

In addition to providing loose and packaged tea to many local retailers, Angela and Shedhe also sell their original blends at Saturday Market.  Angela also does tea parties and tea tastings for individuals and private parties.  We serve some Labrang Tea Traders tea hot at the Kiva coffee bar as well.

We’ll miss Angela, but we’ll have her teas to drown our sorrows in, and wish her the best in all her new adventures!

By kivagrocery in Uncategorized on September 27, 2013.
← Open a New Chapter with Our New Chapter Raffle Customer Appreciation 2013 →